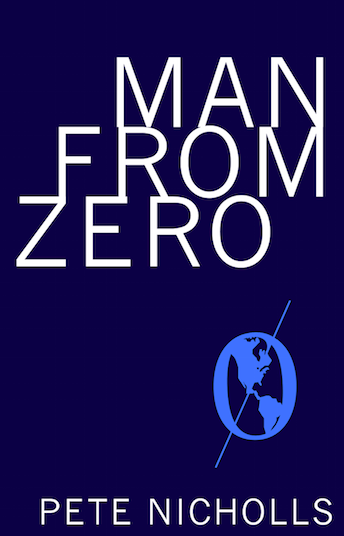 Have I mentioned that I have a book on Amazon?  It’s TRUE!

I spent the better part of 2 years working on it, from my first idea for it, right up to the end of editing.  It was a huge challenge doing it all on my own, from finishing the first draft to designing the cover, designing the “Zero Earth logo” and on to the hardest part: making sure everything made sense, narratively, grammatically, and typo-free-ly.  So, even if you’re not a scifi fan, I’d really appreciate it if you went and bought it.  It’s only $11 ($3 for the Kindle version!) which is pretty good for a self-published book, I think, so go buy a copy now, will ya?

Oh, you might want to read it?  COOL!  Well, you probably want to know what it’s about, then.  MAN FROM ZERO tells the story of ex-mercenary, Drake Marcus, who is given an offer he can’t refuse: get his freedom back in exchange for doing one thing–deliver a package to one of the most secure space stations, secretly.

Does he do it?  Well yes, and no.  You’ll have to read the book to find out how.

Along the way Marcus discovers there is more to life and more to him than he ever thought.  MAN FROM ZERO takes place in a dystopic future where Earth, ravaged by Climate Change and the near complete failure of all infrastructure, is known as (and treated like a) ZERO.  The wealthy live off-world, having lives not too far off from those of the Middle Class of the 20th Century.  However, a lot has happened since then.  Pick up your own copy of MAN FROM ZERO today!!