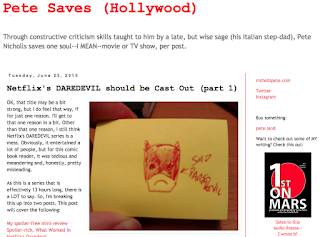 It’s been a LONG time in the works, but finally, I have part one of my take on Netflix’s DAREDEVIL TV show posted and sadly, it ain’t pretty (big surprise). Here’s a taste: 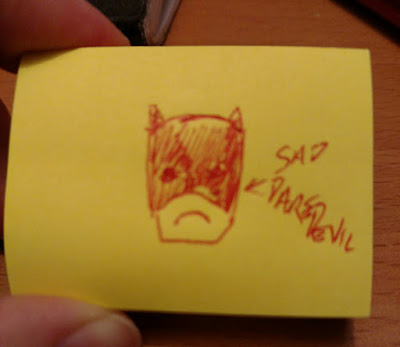 OK, that title may be a bit strong, but I do feel that way, if for just one reason. I’ll get to that one reason in a bit. Other than that one reason, I still think Netflix’s DAREDEVIL series is a mess. Obviously, it entertained a lot of people, but for this comic book reader, it was tedious and meandering and, honestly, pretty misleading.

As this is a series that is effectively 13 hours long, there is a LOT to say. So, I’m breaking this up into two posts. This post will cover the following:

My mini-review is that, as an action show, it was really well made. The action sequences were realistically staged and felt more like real life than anything else in the Marvel Cinematic Universe. The acting was nearly perfect. I had a few issues with both Charlie Cox and Vincent D’Onofrio’s choices, but I stopped caring about the ones with Cox as the show progressed and the ones with D’Onofrio only got worse as the show went on. More on that, also, in a bit.

Honestly, I was left a little flat by the show, both as an adaptation of the DAREDEVIL comic and as a TV show. When I said it was misleading, earlier, I meant that this show is called “DAREDEVIL” but it really should have been called “MATT MURDOCK” because of how not like the comic character he was.

I’m not a huge fan of the comic, but I read it for a few years back in the late 80s/early 90s. I know the character’s abilities and origin story and really thoroughly enjoyed how he was a kind of blue-collar Batman. To be clear, I am no expert on the comic character. That said, the show does stray from the comic that I remember in many places, so using “that’s the way it was in the comic” should not be used to excuse a weak choice in the Netflix version. Honestly, I found the comic book version much more fun and intriguing. His powers were much more developed and understandable in the comic than in the Netflix version. I understood how he could be fearless. In the Netflix version, he just came off as kind of an idiot.

I know Daredevil got his ass handed to him a LOT in the comic. The thing is, somehow the Netflix version didn’t manage to make him seem dauntless, so much as stupid. To go into more detail, I need to take you into a spoiler-rich zone. You have been warned.

I loved the relationships. I got where everyone was coming from and genuinely enjoyed seeing them interact as humans. The really nice thing about the Netflix-model for episodic storytelling is that you don’t have to break for a commercial. You can let your scenes run a little longer and it’s great. In the first few episodes I LOVED Matt’s discussions with Claire and Foggy. I really dug D’Onofrio’s choices early on. Loved loved loved them. More than that, I ADORED Vondi Curtis Hall’s take on Ben Urich. Urich is probably my favorite non-powered Marvel comics character (SPOILER ALERT: it is how the show treats this character that makes me think Netflix’s DAREDEVIL should be tossed in the trash and done over–more on this in part two of this review).

I don’t have a problem with the general idea of the series–to be a sort of DAREDEVIL: YEAR ONE kind of thing. The problem with that is, it ultimately doesn’t work. And that’s my biggest general problem with Netflix’s DAREDEVIL. It was the most boring, repetitive origin story EVER. It made me long for the runtime of Ben Affleck’s DAREDEVIL movie. My wife, at one point, looked up the Netflix DAREDEVIL hashtag on Twitter and found many tweets echoing the following sentiment:

Want to see what kind of writing chops I really have?  Check out my book on Amazon or listen to the audio drama I wrote.