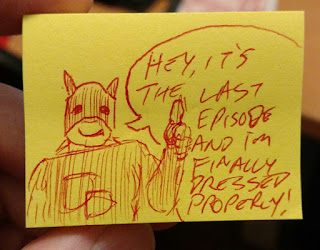 This is part two of “Netflix’s DAREDEVIL should be Cast Out” (read part 1 first! It’ll make more sense!). Do I still think that since I wrote part one? Well, as I wrote both parts as one giant thing over the span of a few weeks, yes. Of course. This is not because I felt the acting was bad or the production or anything else was bad–aside from the script.

If you haven’t already read part one, go read it now. It includes a nice little spoiler-free mini-review that covers the basics of the mess that I think Netflix’s DAREDEVIL really is. It also covers:

In part two, we will cover:

OK, here we go with part two! Remember This is a SPOILER-RICH ZONE… YOU HAVE BEEN WARNED.

Enough with the Origin Stories, Guys!

What is probably the biggest problem Netflix’s DAREDEVIL has, is that it’s lead character’s arc is too long and too boring.

How many times do we need to watch Matt Murdock get the crap kicked out of him before he becomes the character called “Daredevil”? When the final reveal comes for Fisk’s sinister plot, it’s like really not impressive. So, I don’t know why we had to wait so long to have Murdock put on the red suit. Clearly they were trying to go for something symbolic between Daredevil and Fisk, but their arcs simply did not parallel at all. Fisk was already the flawed but brilliant mob boss with his plan already in motion, while Murdock was still stumbling in and out of fights while everyone called him “The Devil of Hell’s Kitchen” instead of what they should have been calling him: “Daredevil” and/or “The Man Without Fear.” (Again, I don’t care if that’s the way the comic was–in the live action show, it’s a weak choice and, as a viewer, frustrating to wait through.)

I mean, come on. The guy’s name is in the title, right? He’s called “Daredevil” NOT because of his connection to Hell’s Kitchen (though the irony is nice), he’s called “Daredevil” because his super-power allows him to be a daredevil. The way the Netflix version handles his origin story would be like having Peter Parker be called “the wall crawler” for 13 hours of screen time. Does that make ANY sense at all?

And those 13 hours are LONG compared to most other shows. I think they seem even longer when you watch them back-to-back. It’s just the same fights over and over. I mean, sure, they’re all gritty and stuff, but there’s nothing emotional invested in the fights. It’s always Murdock’s life that is at stake or some unseen innocent. And after the first couple of fights, I could not care less about Murdock because he was dumb enough to go into fight after fight without reasonable weapons or armor. In an age of competent Marvel heroes, Daredevil was very taxing to watch.

I think this may be the thing Netflix genre shows do wrong–there is a TON of redundancy here and nothing makes you feel it more than when you binge-watch the entire series over the span of a few days. The Wachowskis have the same problem with their SENSE8 Netflix series. So, I’m worried that it’s a trend.

Maybe if each episode had been released a week apart, redundant scenes would be OK and would function as reminders (like how it worked with Sony Playstation Network’s POWERS series). But all of the episodes available at once really hung a lampshade on the fact that the first 6 episodes should have been compressed into the first 2. There just isn’t enough interesting to stretch out across all those episodes. As a result, the entire first season is a failure as a “Year One” style story.

Sadly, that’s not the end of my problems, either. However, these final two issues are more subjective than my other points, but I think I have good technical reasons for my advice to be taken on them. First, let’s talk about the one that gives me away as a big old Marvel fanboy…

What REALLY got My Blood Boiling About Netflix’s DAREDEVIL

This is a huge fanboy thing, but, killing off Ben Urich broke my heart. I am not kidding you. If it had happened any earlier in the series, I’d have stopped watching. Period. The show was dead to me when they killed off Ben Urich. I only kept watching because there was only one episode left.

The thing is, Ben Urich is a fairly major guy when it comes to non-powered characters in Marvel storylines. I think he shows up in all of the more gritty NYC-based comics. I remember him from SPIDER-MAN and DAREDEVIL, but I checked his Wikipedia page and found that he was involved in the CIVIL WAR storyline, which the MCU will be doing in the movies, soon.

This is where I bring it back to the technical side of things. If Ben is used a lot in the comic-version of CIVIL WAR, then he’s going to be missed in the MCU version. But, even outside of that, having a classic, old-school, hard-boiled reporter around is great for telling stories of the big city, whether you are telling those stories inside the MCU or the Marvel comic universe or anywhere else. He’s like a film noir detective only with stronger morals. The archetype Ben Urich represents is kind of invaluable in telling urban-based stories. And now he’s dead to the MCU.

And Ben Urich was my favorite thing about Netflix’s DAREDEVIL.

I LOVED that they cast a black guy as Urich and Vondie Curtis Hall WAS GREAT! The scenes between Urich and his wife were so wonderfully sad and made me tear up almost every time! I understand that his death is supposed to be a tragedy, but the script has already provided us with enough tragedies. Mrs. Cardenas, Karen having to shoot that guy and feeling terrible about it later (LOVED that, by the way), and just everything being so gritty. We did not need to lose the strongest part of the show.

World Building and the MCU, How Netflix’s DAREDEVIL Screwed it Up.

This brings me to the final big problem I have with this show. I don’t think it fits into the MCU or the real world. First, with the killing-off of Urich. Instead of using the time-wise and life-weary Ben Urich (well established in the comic), the heroes involved in the CIVIL WAR arc in the MCU movie, will have to rely on the journalistic skill of some other reporter in the Marvel universe more obscure than Urich, or one just made up for the movies. Urich was a strong part of the comic universe and to kill him off just seems like a really weak choice. What the MCU has been doing right this whole time is keeping things fairly close to the comics. It’s not like the comics did a lot wrong. I mean, sure, they’re not perfect, but the comics have been around for half-a-century. They’re certainly doing enough right to keep people reading.

So, stick to the books, folks!

The most we get toward the establishment of a truly hellish Hell’s Kitchen is a lot of general talk about how it’s a hell-hole and how the entire area got wrecked during the Battle of New York. The thing is, we never saw how it got wrecked during the Battle of New York or even how it is wrecked. In the first AVENGERS movie, we are only treated to the partial destruction of random buildings around Grand Central. The movie never establishes how, or even that, Hell’s Kitchen is damaged. The producers of the very enjoyable AGENT CARTER series actually included footage from CAPTAIN AMERICA: THE FIRST AVENGER movie in some of the episodes to help establish Agent Carter’s place in the MCU. That was great because it helped the series feel more a part of the MCU. We needed something like this for DAREDEVIL–both to establish its context inside the MCU and to show how Hell’s Kitchen is as bad as the dialog keeps claiming. This is like screenwriting 101 stuff.

I’m sure I’m partially biased because I know the real Hell’s Kitchen, but I was looking for visual cues that told me this was a horrible place and I just couldn’t see any during the exterior scenes. When we visit Mrs. Cardenas apartment, sure, that place was horrible–but that just made me wonder why she wanted to keep living there.

In the end, this show just didn’t feel like it was existing within walking distance of a major alien invasion.

OK, Pete, Dare to Tell the Class How You Would have Written DAREDEVIL

First off, I’d ditch the whole “year one” structure. Pretty much everybody hates origin stories these days and stretching one out to 13 episodes is really hard to do well. While CW’s ARROW managed to do it for 3 seasons, they literally balanced that origin story with the much more developed Arrow character in the present-day scenes outside of the flashbacks. Beyond ditching the YO structure, I’d establish the show as a show that is one-part action and one-part lawyer. Daredevil is NOT Batman. He has to work to eat. In the Netflix version, I had no idea how any of them could afford to keep their lights on or afford to pay their booze bills (and they did drink a LOT–what the hell was that about? Doesn’t anyone play video games to escape anymore?).

I’d make sure everything starts off really well for Murdock, both as Daredevil and as a lawyer for the little guy. But, pretty quickly, I’d start his descent into hell. As the first season progresses, I’d have him start losing more and more cases due to corrupt judges, cops, etc, and more and more lives due to mob violence. In the beginning of the series, he’s a one-hundred-percent competent hero (with his fully developed radar sense from the comics) leaping off buildings (like in the comics) and busting heads, but the more his lawyer-life falls apart, the more distracted he becomes as Daredevil until he loses everything by episode 10 or 11. Then he gets his ass handed to him in a fight and finds himself at St. Agnes’ Orphanage, where a nun discovers him and nurses him slowly back to health. From there, he wages a final battle, of sorts, with Fisk. He ends up winning, but only barely (Fisk hires actual bad-asses from the comic, like Bullseye and/or others). Back at the orphanage, the same nun is very relieved to see that he survived, though he did take a beating, and once again starts to nurse him back to health. The mini-climax comes after the big fight climax, and is when he tells the nun about his life story. He senses her heartbeat and notices that it skips whenever he refers to never knowing his mother. He then realizes the nun is his mother. But there should be no dialog. It should only be on Matt’s face that he’s finally found her.

Do I really think Netflix’s DAREDEVIL should be cast out of the MCU? Yeah, I kind of do. Though now, it’s not just because of Urich’s death, but also because, in the great scheme of the MCU, this show was just a big fat “so what.” It doesn’t connect with the MCU in any meaningful way and doesn’t have much interesting to say on it’s own. Honestly, it left me longing for a SPIDER-MAN TV show, which I know, I’ll never get.

Was Netflix’s DAREDEVIL entertaining? I suppose so. Some people liked it. But wouldn’t it have been better my way? You know, with an actual story instead of just really uninteresting character arcs?